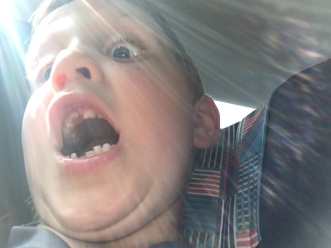 I’ve been an infrequent blogger this summer, mostly because for the second summer in a row I’ve largely let go of any writing habit. It started with the week in June with Emilio, playing like a six-year-old since I was with a six-year-old, which was enormous fun but left no room for writing. An editing job with a July 1 deadline also ate up most of my desk time, making other people’s writing work better, leaving little energy for pulling my memoir into a better shape.

Then it was vacation time with family, followed by a week at the Vermont College of Fine Arts Postgraduate Writers’ Conference, a week spent immersed in workshopping, generative writing, outstanding readings by the outstanding faculty and talks about the craft of writing. It was inspirational and gave me a clear bead on exactly what I need to do next to get my memoir in shape to get it out into the world. But there’s was no time to actually work on the memoir.

The week at home after the conference and before returning to New York for another week with Emilio was consumed with harvesting and processing the bounty from my garden (yes, an electric mesh fence really does work — at least so far — to keep the woodchucks from eating my vegetables and flowers before I can get to them). The time I did have for creative focus I found myself drawing, pulled into my right brain after a week of such intense language, left brain focus.

Today I fly back to New Hampshire and will have 24 hours at home before David and I leave for over two weeks in Ireland. It’s been a very fun week again with Emilio — playing miniature golf, seeing how many times in a row we can catch each other’s throws (55 is our record), going to parks and playing the game of Life. He and I can be silly, serious, focused, scattered, wild and quiet together. He’s sweet and intense, loving and competitive and fiercely athletic. I’ll miss being with him and Ava every day; the energy of small children is amazingly centering because there’s no time to be anywhere other in the moment you’re in with them.

An added bonus of the week: celebrating my birthday which included Ava painting her legs with the blue frosting on my ice cream cake. It was impressively messy and abandoned. Emilio continued his habit of taking whacky selfies while I’m driving.

Now I’m looking forward to a traveling adventure with David. It’s been a long time since we’ve spent a couple of weeks only with each other, exploring a new country. We’ll be walking the Beara Way, then traveling to Connemara and Donegal. From everything we’ve read and heard about Ireland, I expect we’ll be stunned by beauty, heartened by a friendly culture, and cheered by the camaraderie of pubs. I’m also going on a Twitter fast. Who knows, maybe I’ll even go a day or two without checking the news.

All of this activity has made the summer fly. But it’s not over yet and this next journey should be as rich as all the summer I’ve already lived. Want to get a sense of what it’s like to walk, drive, drink, tour, discover and relax in Ireland? I’ll be blogging while we travel, so follow along.