And so are chives and yarrow, phlox and the dusty purple coils of columbine. The green world is breaking out, the biggest plant so far the Egyptian onions from a clump my grandmother gave me 30 years ago. The onions are a gangly, messy allium that grow in bunches. Their fibrous green shoots sprout clusters of small onions on the tips, get heavy and fall over to the soil to root and start another bunch.

My grandmother gardened into her 90’s, though at some point in that decade she said to me, “You know, I get so tired. I can’t just dig in the garden for hours and hours anymore.”

At 97 she was still driving, and was in an accident; she was hospitalized and then in rehab for a couple of weeks. The accident wasn’t her fault. When I visited her at rehab she told me the problem with all the people there was they didn’t have anything productive to do. It made them lazy and slow, they could be doing factory work of some kind. She stood and said, “You should see how they walk,” and then did an imitation of an elderly person’s halting gait. She may have been the oldest person in the facility. 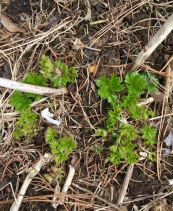 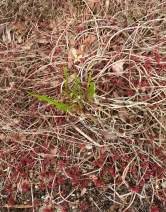 So I see the onions green again and think of what a feisty, self-reliant and matter-of-fact person she was. I don’t remember her ever hugging me. I don’t remember her ever telling me she loved me. That was all assumed. When she visited she brought hats and mittens she’d knit for my sisters and me, she made sauerkraut and mashed potato pancakes, she played the piano and had a hammock on her porch. She gave me Egyptian onions.

One night when I was young she put me to bed. As usual I was anxious about going to sleep  — how could I make sure I didn’t die if I wasn’t awake? I told my grandmother the tall white pine outside my bedroom window scared me. The branches looked so menacing. “Oh no,” she said. “Don’t be scared of trees. The trees are your friends.”

She lived to 102, in her own house, alone, until the last month of her life when she moved to a nursing home. She had bladder cancer and went there “to die,” as she told me. She seemed fine with it. A year before she’d been hospitalized and when I visited  she complained that she couldn’t get a needle and scissors so she could sew. There was nothing to do.

Nothing to do doesn’t work for me either.