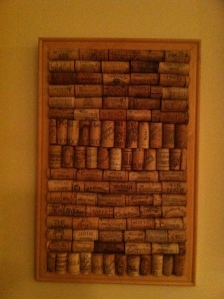 One of the other poets in my Yogurt Poets group brought a poem to our workshop recently, in which a woman rises from her coffin at her wake to ask for a recipe.  Jennifer said, when we talked about the poem, that she’s come to think the only real way we live on after we die is through the perennials we divide and distribute and the recipes we share.

I’ve been thinking a lot about how people live on, have actually thought a lot about it since Eric died, but it’s been closer to the front in the last six months, as I helped to dismantle David’s family’s home.  A few things from David’s parents’ house ended up here, but mostly their possessions went to auction and Goodwill and the dump.

When I first started cleaning out the house in Lancaster this summer, I noticed a small bulletin board made of wine corks in the kitchen.  “Ah,” I thought.  “Alison would like that.” She’s been collecting wine bottle corks for years, maybe even decades.  She plans to someday make a table with a top of wine corks, or some sort of cork-sided object.

This winter when David and I were doing the final clean out of the house, while the auctioneers were there carting away room after room of furniture and decorations, the cork board was still hanging in the kitchen.  I took it down, took the old papers and tacks off it, and put it at the top of a box I was filling.  When Alison came to my house a week later to help me move some rugs into our house, we opened a box looking for scissors and there was the board. “A cork board!” Alison said and I lifted it out and handed it to her.  “It’s yours.  I brought it back for you.”

When I was at Alison’s this past weekend, there was the board, hanging in her kitchen by the table.  So now there is a bit of Betty and Baird in a corner of Alison’s house, a sweet and simple legacy.

One Reply to “Legacy”