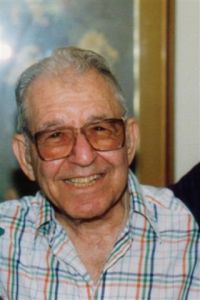 I opened my copy of The Oxford Book of American Poetry on Thursday, looking for a favorite Wallace Steven’s poem to read to a group of poet friends who were coming over later that afternoon.  Tucked into the back of the book were sheets of note paper.  I pulled them out and saw they were covered with Eric’s handwriting.  Reading his writing, it was quickly apparent that the larger set of sheets were Eric’s notes for his father’s eulogy.  The smaller note paper had Eric’s thoughts for his aunt Fagel’s eulogy.

Eric’s father, Raphael Schain, or Ray, or Daddy-Ray as my children called him, was a sweet, compassionate and hard-working man, who lived most of his adult life with MS. Reading Eric’s notes, I thought of Eric himself, and how much he was guided by the example of his father’s life, in spite of his early rebellion.  When I met Eric he had little contact with his family, and in the beginning years of our relationship, all contact ended for a while, as they all healed from a period of misplaced expectations and then learned to love each other as they were.  By the time Eric’s father died in 2004, we’d had decades of close family time, and I’d come to understand how much of Eric’s character, his lived values of faith and kindness and good works in the world, came from his parents.  Eric says it the best in his words about his father.

“As a child of the depression my father was determined to find a career that would match his abilities with a profession that would enable him to be a reliable provider for his family.  As a result, he chose accounting.  He succeeded.  We never felt a hint of instability — he provided for his children’s education and the stability he provided exists to this day.  As a rebellious child of the 60’s I left my father’s house thinking I had little to learn.  What I said to my father last week is how I’ve come to realize that so much of what I’ve become that is positive is due to his influence, his value, the life he led.  Thank you, Dad, for the way you taught me to embrace our faith, Judaism, both in learning and in minyan, for the value of work, of being a good worker, colleague and leader, for your example of making our world a better place as a result of your acts, your involvement, your charity.  All the good that I may bring to my family, community and world, all that our children may bring is because of you.  Thank you and I miss you very much.”

What a blessing, that Eric and his father were completely at peace with each other when his father died.  Tomorrow, it will be Fagel’s turn.