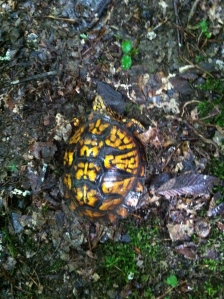 David and I are in Tennessee, helping Sam and Marianna with wedding prep.  Yesterday we felt on top of enough of the many many many details we’re all managing (putting on a party for almost 200 people takes a lot of detail management!) to go for another pre-England Coast to Coast training walk.  We headed for Haw Ridge Park, right outside of Knoxville, because “it’s full of trails,” as Sam said.

A bit too full.  We found our way to the water along the edge of the big peninsula that makes the park, and had a pleasant hike, eventually coming to a couple of picnic benches out on a spit of land.  By then it was raining lightly, but it was dry under the trees and I took out my iPhone to check my exercise app and see how far we’d walked, and looked at the map function to see where we were.  We decided to walk a bit further along the water, then look for a trail to cut back across the middle of the peninsula to the car.

Then it started to pour.  Really pour.  And one trail looked like another, and there were a lot, and they all seemed to curve and twist and soon it was impossible for us to figure out where we were going.  Occasionally we’d stop, I’d take my iPhone out of my new gore tex jacket it was folded into inside my pack, David would hold the pack over my head to block the rain so I could look at my phone without getting it wet, and we kept finding ourselves in the same circle.  Not once, or twice, but three times we went in the same circle.

By now we were drenched, it was getting late, and we realized we were really quite lost. In one spot where we stopped to check the phone, there was a painted turtle on the path.  After we looked at the phone, I looked back for the turtle, which had been a couple of feet behind us.  It wasn’t there.  I looked down at our feet and it was trying to burrow under David’s boot, it’s head butting up against the black sole.

David stepped back carefully from the turtle, I put on my gore tex jacket and put my iPhone in my pocket so I could pull it out and check where we were going on the exercise app more frequently, and eventually could tell by the moving blue ball on the map that we’d found a path under the power lines that would eventually lead us out of the woods.  We got back to Sam and Marianna’s house drenched, muddy and hungry and feeling ready for whatever kind of weather and twisting trails England might dish up.