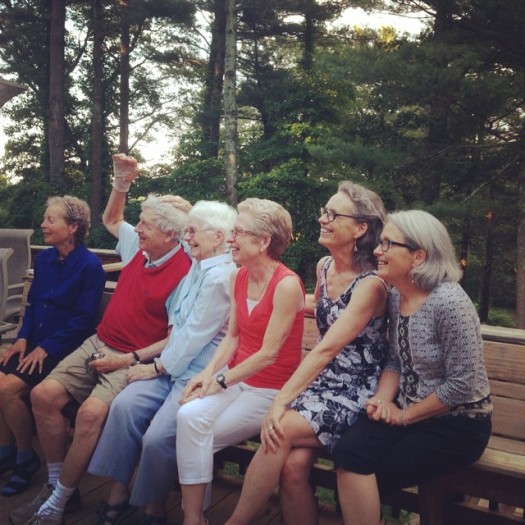 Coming up on the porch of the cottage my sister Chris is renting on the beach this week, I noticed there were four gift-wrapped packages, sitting on top of boxes, on a bench.  My parents were both sitting in porch chairs, and smiled at my sister Meg and me when they saw us.

“Those are for you,” my mother said, and Meg and I saw there was a gift for each of us four sisters.  Jeanne is visiting for the week, and we were all together over the weekend to celebrate both of my parents turning 90 this summer.  It had already been a great weekend, with all of my sisters and their husbands and most of the next generation there too.  Now we had gifts to open? 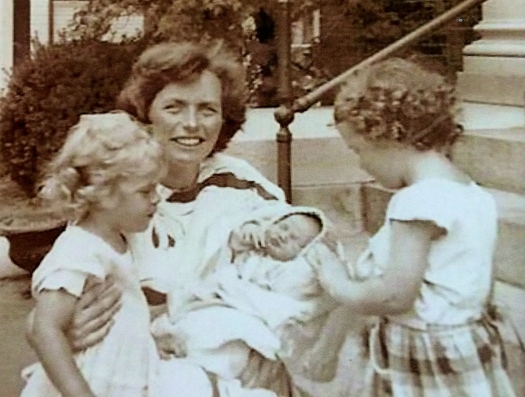 Meg opened hers first, and I could see it was an album with old photos and papers from her childhood.  I opened mine eagerly.  There was my birth certificate.  There was a photo of my mother holding me as a baby, Jeanne and Chris, both older than me, standing next to her.  There were photos of my grandparents on both sides, photos of great grandparents I never met, photos of my sisters and me dressed up as young children and photos of us all goofing for the camera as teenagers.

Best of all were the pieces of writing my parents had chosen to include, from when I was a child.  In the boxes under the albums were more papers for us all to sort through and decide what to keep.  There are blank pages at the end of each album, so we can fill in with what we want from the boxes — report cards (my grades in high school weren’t as good as I’d remembered), newspaper articles, award documents, SAT scores?  I went through the box this morning, and there are treasures there, especially the writing I did in grade school.

But my parents had already picked out the best piece for the album.  It’s dated March 2, 1962 (I would have been nine years old), and was obviously written as a school assignment.

“Whipped Cream” is the title.  “Last Monday night we had whipped cream on our dessert.  My mother told my sister and father not to use much whipped cream.  After all that talk my mother took the most.”