The Vatican Museum was mobbed, and I don’t mean just crowded, I mean Extreme Tourism in the number of other human beings moving through room after room of frescoed walls and ceilings and gilded moldings and marbled walls.  As David and I by-passed the thousands (it seemed like that many) of people waiting in line to get in to the museum, having bought tickets ahead of time online (a must for many of the museums we visited in Europe), we were thankful we at least didn’t have to wait.

But being inside, with all those thousands who had already gotten through the line, felt suffocating.  The crowd was so thick it was almost impossible to do anything but move from room to room with the mass, streaming along and then backing up and getting stuck at narrow doorways.  The museum map was the worst I’ve ever seen, so it was difficult to know where you were or how you might exit the mess.

But we wanted to see the Sistene Chapel and the rooms of Raphael frescoes, so we kept moving.  The art was extraordinary, and we especially enjoyed the room of geography, mapping ancient Rome, as we could see the cities we’d visited in Provence.  And the Raphaels and Sistine Chapel were as terrific as we expected.

Except, because the Sistine Chapel is supposedly a sacred space, as determined by the Catholic Church, every five minutes or so, as the hum of thousands of people crammed into a small space would start to rise, a stern male voice would announce, “Attenzione!  Silenzio!”

Really?  The Catholic Church is letting this many people into a “sacred space,” and then expecting them not to be human?  To be totally silent?  For all the reasons I’m sure you can imagine yourself, I found it difficult to be told to be silent by the Vatican, after touring the on some level obscene riches of the Vatican.  Who was silenced to build the wealth of this church? How can they honestly reconcile inviting this many people into a chapel and then expect them not to make any noise?  How much money is the church making off this museum? 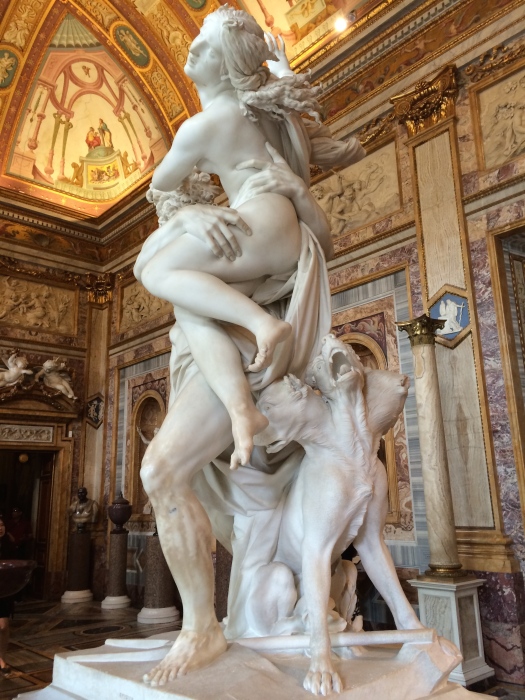 On a positive note, the Borghese Galleria was outstanding.  Again, it’s a museum showcasing the riches of the privileged, in this case the Borghese family, which extended its wealth in part because a member of the family became a Pope.  The smaller scope of the museum made it easier to take in, and aren’t all museums, to some degree, showcasing what the rich have collected?  Our advance purchase tickets gave us two hours, strictly timed, in the museum, so there were never too many people.  The Bernini sculptures were astounding, and the frescoes and decorated rooms and Caravaggio paintings were well worth a visit.

And afterwards you can walk in the Borghese Gardens, a wonderful green space in Rome. Tomorrow I’ll be walking in my own garden, not an unwelcome thought.