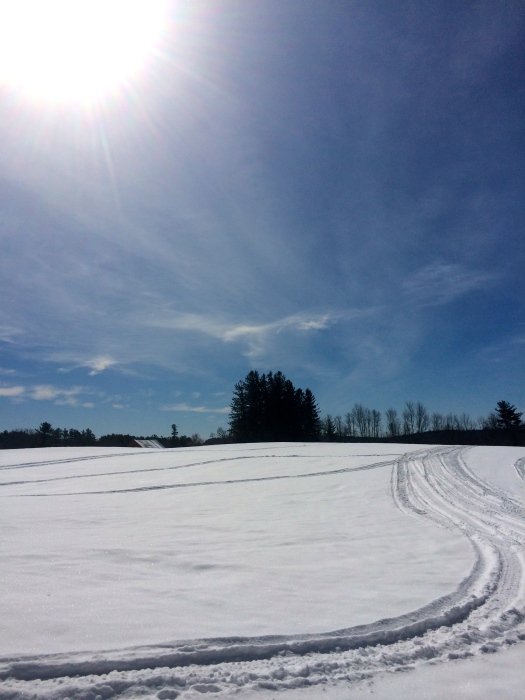 This morning I woke to a new winter coat on the grime, the real dirt of living that’s been etched on snowbanks everywhere for the last week now hidden in a fresh, if wet, three inches.  I’ll take it, as long as it melts fast.

Driving home from Long Island yesterday afternoon we expected snow showers at the end of the drive but it wasn’t predicted to amount to much.  But by the time we got near Concord there was a steady, heavy snow that whipped into our faces when we stopped at a rest area.  Still, the snow was melting on the road, which was wet like it was raining, no problem.

Until we climbed the Chichester ridge to the east of Concord, headed to Northwood. Suddenly there was snow on the road at the top of the hill, and a good bit of it.  Three inches at least, and dense and sticking to everything.  The last 10 miles of the drive turned in to a slow moving train of cars as we all crawled along the slick road, snow still swirling. The car splashed up mud as I turned in to the driveway, but otherwise, uniform white.

It was a bright morning so I got out on the snowmobile trail to ski early, before the sun could warm the snow to too sticky, before the melting began.  There were spots of sticky snow, but there was also fresh powder on every branch and needle and twig, a wonderland of white again, a glimpse back at a spectacular winter of snow.  And then I was gliding along the tracks, maybe for the last time this year.

Error: Twitter did not respond. Please wait a few minutes and refresh this page.