Tenerife is the largest of the Canary Islands, and from what I’ve seen in a day and a half, it’s a perfect playground.  We’re staying on the beach in El Médano, and when I say on the beach, I mean it.  The balcony of the AirBnB apartment we’re renting is directly above the boardwalk that runs along the beach and as I sit here typing in the pre-dawn light the white lines of small waves breaking on the sand roll towards me and lose their edges on the dark sand as the next line moves in.

El Médano is on the southeast corner of the island, with a 12,000 foot volcano behind it, to the north.  Teide is the highest peak in Spain (while 300 km off the coast of Morocco, the Canary Islands are politically part of Spain), the tallest land mass in the Atlantic Ocean, and the third tallest volcano on earth, after two in Hawaii, when measured from the ocean floor. Capped with snow, it makes an impressive sight from the shore, sea level to 12,000 feet in one view.

Known as the island of eternal spring, the trade winds moderate the climate on Tenerife — in the 60’s in the winter, the 70’s in summer, though it’s been in the low 70’s since we got here, with a hot sun and cooling wind.  While the water isn’t warm — mid-60’s — it’s certainly swimmable, and there are plenty of people in the water, including David and me yesterday. And likely again today.

The playground part?  Yesterday morning I went for a run, starting out along the boardwalk, headed towards Montaña Roja, a small volcanic mountain at the end of the beach.  As I got around the stores and cafés along the waterfront, I could see runners on the rise of land that leads out to the mountain.  When I got up on the rise, I found a network of hard packed paths, leading through the scrubby landscape that looks part New Mexico, part moonscape.  With its volcanic origins and the arid climate on this part of the island (the north is much cloudier and wetter, due to the weather created by Teide) there are patches of frozen lava, cut banks of rock and sand, and patches of low shrubs.  Perfect running territory — ocean vistas, the red slopes of Roja and the snow-capped ridge of Teide to the north.  And the trails are also perfect for hiking, with mountain biking trails intersecting the network.

The wind picked up, as it does most days, and by mid-morning the water off the beach was filled with wind and kite surfers, the colorful sails and kites dotting the water and flagging across the sky all day.  El Médano is the site of World Cup windsurfing events and it’s easy to see why.  At one point I counted over 80 wind and kitesurfers on the water, bright sails scooting over the wind capped waves like colorful water bugs.  And it isn’t only the surfers who have fun — further down the beach, where the surfers fix their gear and enter the water, people sit behind whatever wind break they can find on the beach and watch the kitesurfers fly, flipping and turning on their boards.  Knowing there are a lot of people playing in this small bay, the beach is clearly divided for swimming and windsurfing, with the swimming area marked off by buoys 200 yards off shore, an ample area for the fast and serious swimmers I’ve seen following the buoy line back and forth.

The beach and cafés filled up by mid-morning with Europeans, but no other people from the U.S from what I could hear of languages and accents.  Of the 12 million tourists who visit the Canaries every year, only 12,00o are from the U.S.  This is where Europeans come to play in the winter, with their topless beach tolerance and laid back ability to stop and enjoy a beer on a sunny afternoon.

I’m still thinking about our time in India, and what it means to be a tourist in a country so challenged by poverty and visible inequality of means.  This world of sun and sand and appreciation for play is a welcome change from the intensity of travel in India, so for now I’m going to take a cue from the Europeans around me and enjoy these moments.  Being aware of the privilege and good fortune that brought me to such a wonderful playground helps me savor it even more.  As does the advice from my mother.

Before we left on this trip I was talking to my mother about my ambivalence about going away — her recent illness and the troubles of some friends making me want to stay close by — and she told me we needed this trip.  “Go!  You and David spend so much time taking care of other people.  It’s time to take care of yourselves.” 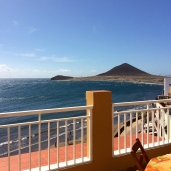 2 Replies to “An Atlantic Playground”