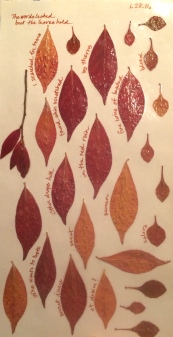 I love standing at my new desk, stroking a brush with long dark bristles across a collage of dried leaves, spreading acrylic varnish that’s both protective and adhesive.  The motion is methodic and fluid, comforting.  I’m making something, a physical object, following a non-speaking muse when choosing the placement of the leaves and ferns, the colors, moving shapes around until it looks right.

I’ve gone through many of the piles of paper and old magazines and cards in my study this week, organizing them by type, maybe some day by color or theme.  For now the old DoubleTake magazines (who remembers that incredible journal from the late 90’s and early 00’s of top-tier writing and photography, and what a blessing I kept them and then David wanted them in his studio and now they’re back with me), Lapham’s Quarterly (outstanding illustrations and graphics) and art advertising books from Santa Fe and the coast of Maine, are together on a shelf, along with other random magazines.  Postcards are sorted in cubby holes of a shelving unit I built in an adult education woodworking class 25 years ago, both new cards and antiques, including souvenir folders of cards from the 40’s, sets Eric’s father was mailing home when he was in the army during WWII.  Eric collected the antique Squam postcards.  I have decades of Mother’s Day and birthday cards from Adrienne and Sam.  Those I’m saving to save, not to collage.

“Where did these come from?” David asked when I made my first collage with the dried leaves earlier this week.  Our trip to Rockport, Maine in the fall of 2008, when we were only months in love and reeling from the death of David’s wife two months before, a quick cancer death like Eric’s. David and his wife were in the midst of a divorce when he and I met, but once she was sick he disappeared from my life to go back home and help.  It had been a hard summer, a terrible time for David’s family.  By the fall his back had given out and he could hardly walk.  That he and I were away together, alone, with trees full of red leaves in every imaginable shape of maple, had seemed miraculous.  I walked around the neighborhood where we were staying, carefully picked leaves and folded them in paper towels.  I needed to hold on to something beautiful.  Tucked in books I had with me, I brought the leaves home and somehow kept track of the pile of preserved fall and then there they were, in my study.

Or, my studio.  It’s been a very satisfying week.